The disorder affects your lungs, intestines, pancreas and liver. Your body gets infected with a bacterial infection, which blocks the use of different organs. The disorder reduces absorption of fat in the pancreas, which causes vitamin deficiency, troubled digestion and male sterility, its an inherited disease not a transmitted one.

The disorder is most common among Caucasians, and is one of the most common life shortening genetic diseases in the west, especially in northern Europe except Finland where only 1/80 people carry the disease. 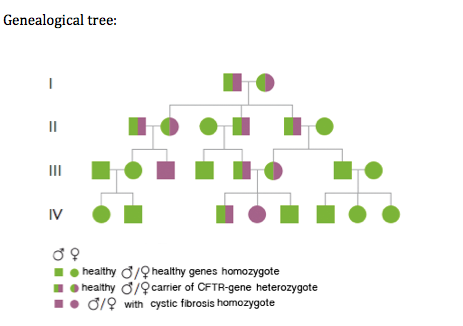 The disorder is characterized by an abnormal transport of chloride and sodium in certain cells in the lunges, pancreas and sudoriferous glands.

It’s the most frequent genetic disorder in Western Europe. Without treatment most people die during the first couple of years but today the chances are that the people with the disorder will live more than 40 years.

The certain mechanism is unknown, but amongst other things the abnormal transport of chloride clogs the airways, which results in a frequent inflammation of the lunges. 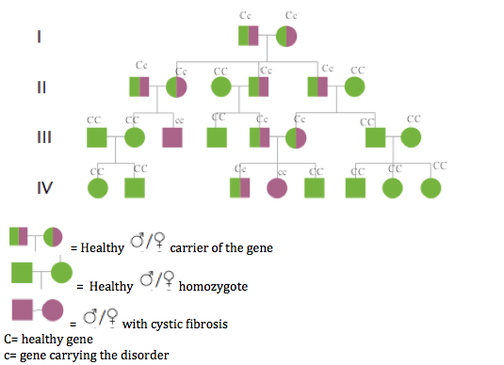 In a genealogical table you name the generations with Roman numbers from top to bottom, and the individuals with regular numbers from left to right.

Since the disorder is recessive you need to have two genes for cystic fibrosis, and you can be a carrier of the gene as for example I-1 and I-2, who have the genotype Cc, that way they can give the dysfunctional gene to their children who can either become carriers or get the disorder, if they get a dysfunctional gene from each of their parents, as for example III-3 and IV-4.

The present spread of the disease

Worldwide: Around 70.000-100.00 people have the disease worldwide. It is difficult to give an exact number in the countries that don’t have organized health care.

Iceland: since 1958 only 21 people have diagnosed with the disease. The current estimation is that around 1 out of 7000 have the disorder. Around 2-3% of Iceland’s population are carriers of the gene.

Chances of getting the disorder

If two carriers of the gene parent 4 children, the odds are that 1 out of the four children will get two genes for CF and one will get two healthy genes. The two other children will be carriers of the gene, but because the genes are given completely at random, it may be that all four of them have the disorder or maybe all four of them get two healthy genes.

If a sick person and a carrier give birth to 4 children the odds are that two of the children will get the disease and the other two will be carriers.