People with albinism have little or no pigment in their eyes, skin, or hair. They have inherited altered genes that do not make the usual amounts of a pigment called melanin. Albinism occures in all races. There are two types of albinism;
- Oculocutaneous albinism (OCA) and Ocular albinism (OA).
- OCA is the most common type of albinism.

Genetics of albinism
The genes for OCA are located on “autosomal” chromosomes. Autosomes are the chromosomes contains the genes for body characteristics. This type of albinism is not sexlinked.
We normally have two copies of autosomal chromosomes and the genes on them. One inherited from our mother and one inherited from our father. Neither of these gene copies is functional in people with albinism.
OCA is a “recessive trait”, so even if only one of the two copies of the OCA gene is functional, a person can make pigment, but will carry the albinism trait. Both parents must carry a defective OCA gene to have a child with albinism.
When both parents carry the defective gene, and neither parent has albinism, there is 25% chance at each pregnancy that the baby will be born with albinism.
This type of inheritance is called “autosomal recessive” inheritance.
OA is caused by a genetic defect of the GPR143 gene that plays a signaling role that is especially important to pigmentation in the eye.
The gene for OA is on the X chromosome. Of this reason it follows a simpler pattern for inheritance than OCA.
Females have two copies of the X chromosome while males have only one copy and a Y chromosome that makes them male.
To have ocular albinism, a male only needs to inherit one defective copy of the gene for ocular albinism from his carrier mother. This makes almost all of the people with OA males.
Researchers have not yet  found a simple test to determine whether a person carries a defective gene for albinism. 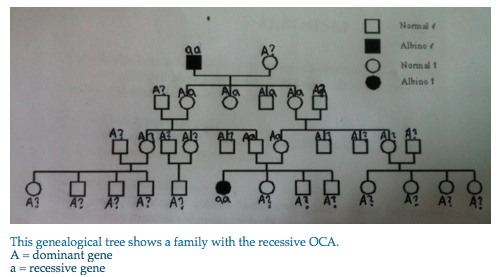